After they do not join the league of nations they hold a massive conference
the first "salt talks" for disarmament. less people in the war
4 part naval plan of hughes: Us were allowed 5 because they had more oceans to protect
but this was not staying out of world affairs - they were becoming a major player
9 power treaty to guarantee open door and indep. of china
treaties and agreements lack enforcement


WASHINGTON NAVAL CONFERENCE:
USA, UK set them selves up so they would have the largest navels in the world
france, italy and japan were also at this conference
USA and UK on a ratio of 5:3:1.67 for Japan, Italy and france respectively

Summary: After the USA did not join the league of nations, a huge conference is held called " The Washington Conference". The first "salt talks" being at this conference for disarmament. The US claimed to be staying out of World affairs, but by participating in this they were actually becoming a major player. The " Washington Naval Conference" included the USA, and the UK set themselves up to have the largest navels in the world. The conference was later joined by France, Italy, and Japan.

View Strategic Arms Limitation Talks and over 3,000,000 other topics on Qwiki. 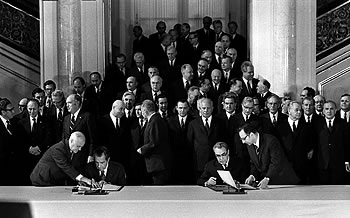 In all things that are purely social we can be as separate as the fingers, yet one as the hand in all things essential to mutual progress.