russian civil war 1919-21:
bolsheviks RED
all opposing groups WHITES
whites wanted tsars back ( they wanted russia to be led by royalty)
whites: tsarist officers
cossacks
bourgeoise ( upperclass)
outlawed political groups
international comment - because they didn't want communism to spread to their counties. ( didn't want revolution to take hold them )
countries that fought: Germany, Britain, Canada, USA all these countries were fighting against russia.
why did reds win? because they controlled the heartland of russia, controlled railways, and waterways, they are centralized-- organization.
they won because leon trotsky was a good military tactician, god at getting country to put their resources toward the war. he was good at propaganda. WAR COMMUNISM- all ressources go to the army. allied countries were half hearted -
by 1921 lenin realized that war communism was not causing a recovery- russia is left with terrible economic state
brought in the NEP = allows for small amounts of capitalism . ( opposite of communism)
some private trade was permitted
peasants could feel surplus
small factories could be purchased by a co-operative for private ownership
some parts of industry began to recover under the NEP

Summary: During the Russian civil war, the Bolsheviks were red and all opposing groups were white. The opposing countries did not want the communism to spread to their countries, however the Red's still won because they essentially controlled Russia. 1921, Lenin realized that war communism was not causing a recovery and Russia is left in a terrible economic state. Some parts of the industry began to recover under the NEP. 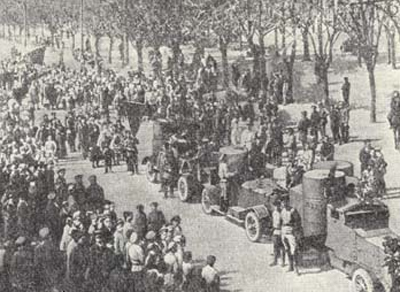 "The way to crush the bourgeoisie is to grind them between the millstones of taxation and inflation."
Vladimir Lenin